Tonight, American Idol began online voting. Yes, I’m a fan of American Idol, but don’t let that fool you: I’m still a bitchin’ cryptographer. I suspect that American Idol online voting will give rise to many questions such as “wow, awesome, now when can I vote in US Elections with my Facebook account?” and “Why is online voting so hard anyways?” Perhaps I can be of assistance. 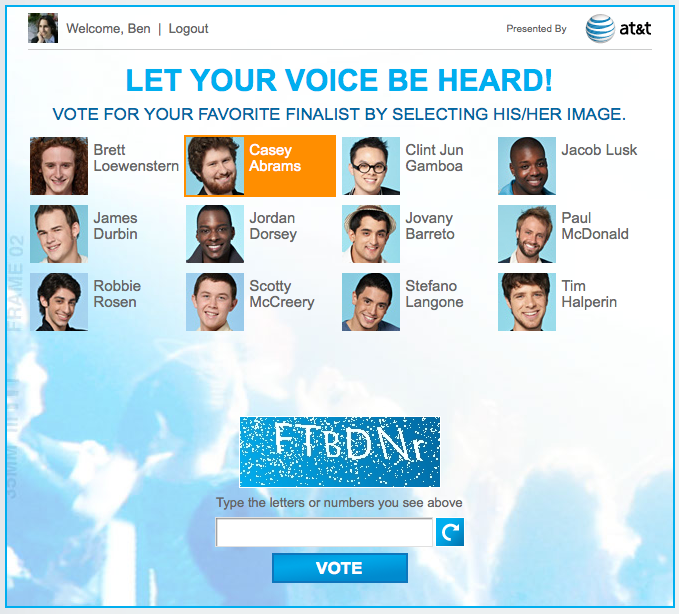 So the process is much like other Facebook-connected sites: using Facebook Connect, you log in and grant the American Idol Voting site some permissions, including reading your profile info (ok), getting your email address (ok I guess), and accessing your Facebook data even if you’re offline (ummm, why?). Then you select your favorite contestant, solve a CAPTCHA, and click “vote”. You’re prompted to post the vote to your Facebook feed, and told you can vote up to 50 times.

My first question was “what’s the CAPTCHA defending against?” I have some thoughts on that, which I’ll get back to…

The news that American Idol would use online voting was reported with enthusiasm:

“We have been wanting to do online voting for several years, and now Facebook has offered us a secure solution and we are ready to go,” said Simon Fuller, Creator and Executive Producer, American Idol.

So what does that mean, exactly? What guarantees do American Idol producers have that the system is “secure?” Hard to say. But let’s explore a few possibilities.

American Idol voting is not secret: your vote is posted to your Facebook newsfeed! Of course, unless you’re a contestant’s mother, chances are no one’s going to be upset at you if you don’t vote “the right way.” In political elections, and in fact in many elections where the outcome impacts voters in a material way, ballot secrecy is important, and undue influence of voters is a concern. That’s what makes things particularly difficult in “real” online voting: you should receive some believable proof that your vote was counted properly, but somehow that information can’t be leaked to others who might try to influence you, waiting to see how you voted to decide whether to pay you or break your kneecaps.

The voting itself is happening on the American Idol site, not on Facebook, so what American Idol is getting from Facebook is mostly the identity layer: to vote, you must have a Facebook account. Between that and the CAPTCHA, it’s probably fairly difficult for an individual user to have disproportionate influence. I have a feeling that’s why they allow individual voters to vote up to 50 times and require a CAPTCHA. After all, if any user can vote 50 times, but the process is fairly time-intensive, how worthwhile is it to register more accounts so you can vote more than 50 times? If voters could legitimately vote only once, then it would be very enticing to create a few fake Facebook accounts to easily quintuple your impact. But to just double your impact with 50 legal votes each, you’re going to have to manually fill out 50 more CAPTCHAs. Eh. Not worth it, right?

In other words, I think the 50 votes per person + CAPTCHA produce the great equalizer: almost no one is going to bother trying to find ways to cast more votes, because the payoff isn’t worth the pain. Clever!

In typical secret ballot elections, it’s quite hard to check that the tally was properly computed. After all, once the vote is submitted, via web, SMS, or phone, the tallying process is visible only to the organizers, and the voters must trust that process blindly. Now, physical in-person elections have admittedly only a little bit more auditability: you can kind of watch the ballot box and, if you’re really motivated, stick around to see the ballots counted. But in the online voting space, unless you’ve got some fancy solution, the process is totally opaque.

Except… voting for American Idol isn’t secret! So, technically, the tally could be recomputed from culling together all of the Facebook newsfeed posts…. And that’s actually a key insight into how the fancy truly auditable voting systems work: all of the votes are published for the world to see, in a special encrypted form that doesn’t reveal individual votes but can be intelligently combined and checked against the claimed tally. That’s what systems like Helios do.

was my vote captured correctly?

If you post your vote to your Facebook newsfeed, you can verify that it was recorded correctly. But what if something hijacks your browser, waits for you to log into Facebook, casts votes on your behalf (waiting for you to fill out the CAPTCHA or outsourcing it to some CAPTCHA solving farm), and opts not to post the results to Facebook? How can the American Idol producers ever detect this? They probably can’t.

The simplest way one might hijack your browser is via a technique called clickjacking: by wrapping the voting site in an HTML frame and layering a different user interface on top of it, a malicious site could trick you into voting for a different contestant than you intend. For example, the attacker might wait for you to cast your first vote freely, find out who you like by looking at your Facebook wall, and then switch the order of the candidates (by layering new photos on top of the underlying real site) to trick you into voting for a different candidate the other 49 times. Now, to American Idol’s credit, my quick-and-dirty attempt to frame their site and implement clickjacking failed: they’ve got some basic defense against clickjacking that I’m still investigating. Nice work! But of course, attacks that hijack the user’s browser can be much more intricate, including deploying and spreading a virus that takes full control of the browser and its display. There’s absolutely nothing a web site can do to defend against that.

And that, in fact, is the key issue we don’t know how to address when voting online in elections that have a high material impact. We don’t know how to make sure that your browser is really working on your behalf and hasn’t been hijacked by malware. It probably wouldn’t happen for American Idol (or would it?), but it surely would happen when voting for US President.